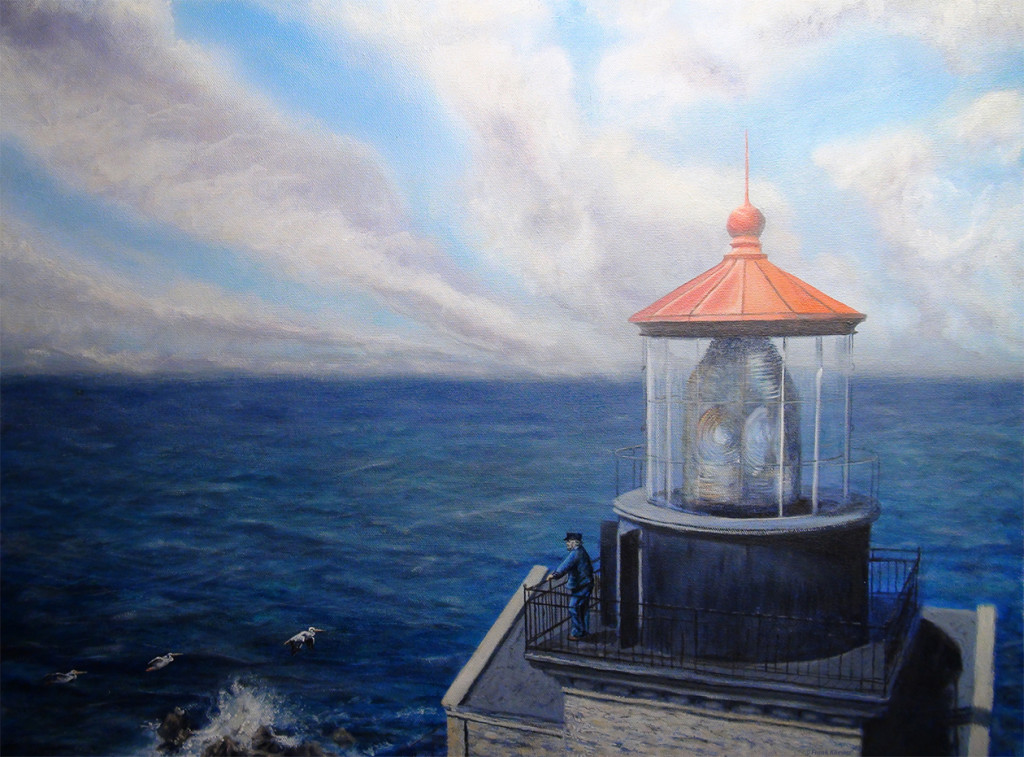 In a re-creation painting of Point Sur Light  (24″ x 18″ acrylic on stretched canvas) Frank honors the way the Point Sur Lightstation would have looked over 100 years ago when a first-order Fresnel lens guided the ships at sea. Today, a much less glamorous electric beacon guides the way. The original beacon is housed in the Maritime Museum of Monterey.  The 580 glass prisms of the historic Fresnel lens from the Point Sur Lightstation illustrate just one of the regular chores of the Light Keepers, as they needed to keep them polished and cleaned of the salt air, to effectively shine the burning beacon of light 20 miles out to sea.

In the painting Frank puts Del, the docent featured in yesterday’s post, out enjoying the light of day and the swooping sea birds frolicking above the surf.

These times of solitary reflection and enjoyment of the surroundings were really quite rare. If you are interested in the amazing details of the Light Keeper’s job requirements, check this out: http://www.lighthousefriends.com/Instructions%20for%20lightkeepers.pdf  The language in use is quite entertaining…enjoy and perhaps gain some extra respect for the work these technicians performed throughout their days and nights.

Blessings and respect to all who serve and protect. 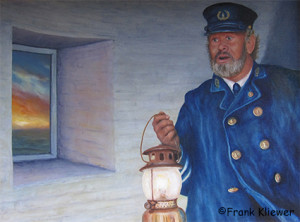 This painting titled “Light Keeper” (oil and acrylic on canvas 24″ x 18″) is a portrait of a modern-day docent, Del, at the Point Sur Lighthouse in California. Apart from the cap he was wearing and his portrait, the rest is Frank’s researched imagination.

The drill for the Light Keeper over 100 years ago was to have the big light on a half hour before sunset, and keep it going until a half hour after sunrise. This painting depicts him running to make his appointed time with the setting sun.

It took a dedicated person to keep a lighthouse flame going so it would project its lifesaving light 20 miles out to sea. Light Keepers were highly respected by most for their critical, yet lonely work. Often isolated far away from busy towns, they would sometimes work through the night to keep the light burning and the emerging technology of gears and pulleys functioning to turn the massive lens shining its distinctive light code, revealing a specific place.

Keeping the light burning and the hundreds of lens prisms polished, was a very disciplined and courageous practice. It may seem romantic, being at the seashore and all, but the reality is that some of the Light Keepers went over the edge, either figuratively or literally, while fulfilling their lonely duties. Some landlubbers on the shore just took the Light Keeper’s work for granted, even scoffing at their value or disrespecting their lifestyle.

The captains and crews of the vessels plying the coastal waters had great respect for the unseen Light Keepers. These traders and builders of commerce showed their support for those protecting them from unseen dangers. It would have been unheard of to demean their vital work or cast aspersions on their lives. 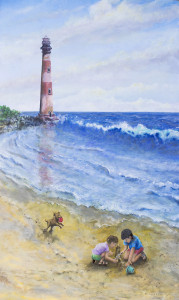 The picture is from  an original painting by Frank, titled “Sand Castles and New Horizons” (18″ x 30″ acrylic on wood panel). You can click on the picture for a larger version.

Frank’s two grandchildren, Griffyn and Alyssa posed for the painting when they were still children twelve years ago. Griffyn is now (September 2015) with the United States Air Force and Alyssa is a senior in high school. Gracy, their mother, is responsible for teaching the values and principles illustrated in the painting.

The lighthouse is the Old Charleston (Morris Island) lighthouse in South Carolina, built in 1876. It is the third tower to occupy that space, the first built in 1767. The poignancy of this fleeting moment of childhood is echoed in the old tower, with its outdated technology and the encroaching sea. And yet it still stands, proud, battered, the stories of lives redeemed written in every brick. It serves as a model for the children learning of its history and following their mother’s instructions to work together and share. This is not an easy lesson to learn and practice daily in our interaction with others, but critical if we are to advance as a civilized world.

May you have peace and joy in the future as you live by the solid values of the past, sharing your good fortune with others. 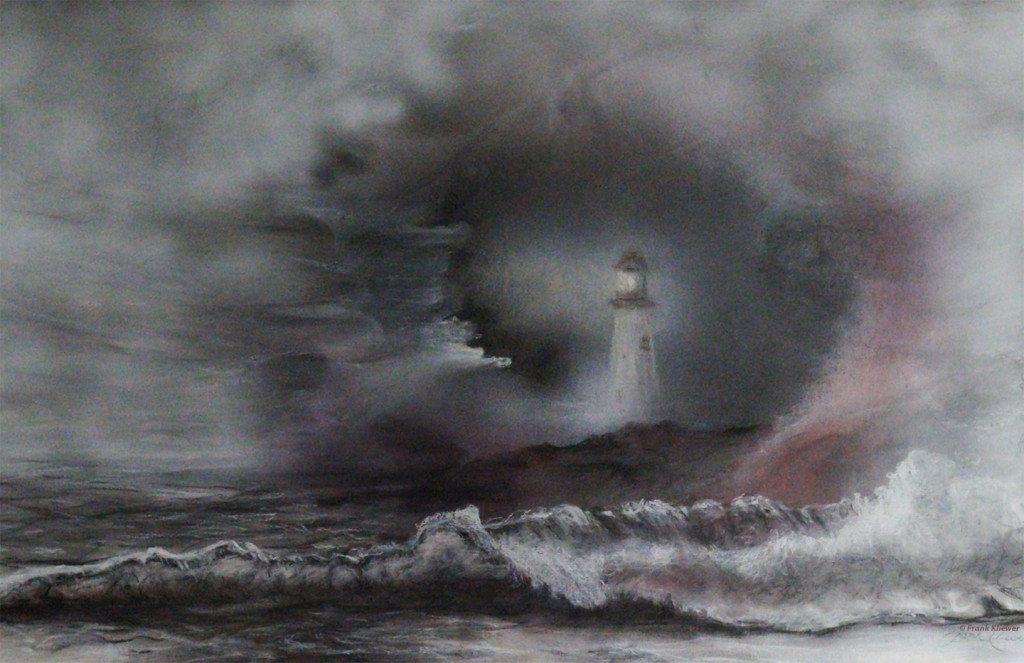 In this first sketch of Frank’s lighthouse series, he was looking to illustrate different points of view around the initial intended function of lighthouses over 100 years ago.

In this 28” x 18” pastel on illustration board, Frank wonders what it would be like for a sailor at sea for months. Would he dream about seeing a light? Would he trust his eyes or think it a vision when finally seeing a light?

This week, we will explore some of Frank’s lighthouse art and share meanings we can reflect on today. Thank you for stopping by! 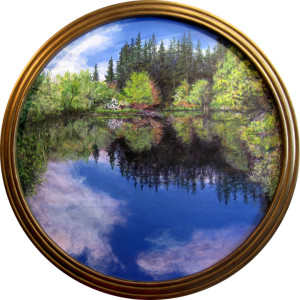 The painting above (approx. 20” diam.  acrylic on wood) was created by Frank for another of his patrons, a world-renowned landscape artist, and art collector. The name of the painting is “Reflection Lake” and presents the favorite view from within the wildlife refuge the landscape artist developed. 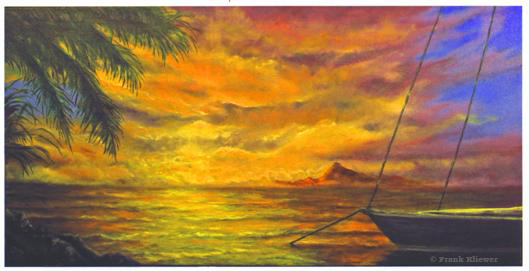 We all have the chance to live our dream. It means making a lot of right decisions, focused on the right path of attainable goals.

One of Frank’s patrons returned from a South Pacific sailing vacation and commissioned Frank to paint a new work. She wanted a composite scene from several photos she took of her memorable time with a friend. Frank painted the “Dream” above, in acrylic on a 30” x 15” stretched canvas.

Live your dream. Be inspired by it.

Just make sure it is realistic, and down the right path…you know which path is the right one. And, if you respect the dreams of others along the way, you’ll do very well in life. 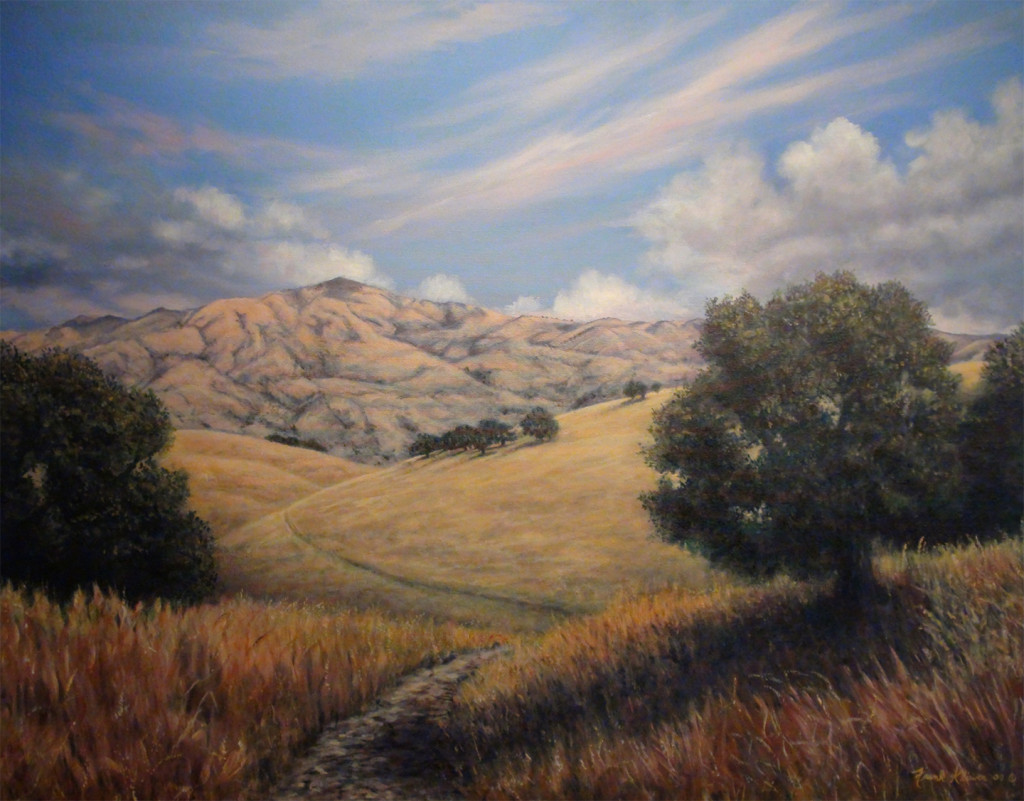 May your trails be crooked, winding, lonesome, dangerous, leading to the most dazzling view. May your mountains rise into and above the clouds.

The painting above “Mt. Diablo” is an original acrylic on stretched canvas (28″ x 22″) continued around the edges. You can select the image for a larger view.

Frank painted this canvas while working with his landscape teacher Charles White. Frank and Mary enjoyed walks with Charles in the foothills around Mt. Diablo in the San Francisco Bay Area. The views from the top are spectacular. Charles showed Frank the compelling nature of having a path lead the viewer into a painting.

Frank, normally a fairly solitary creative producer, is now involved in a new journey that requires new team members to assist with his current path to new heights. More on that in later installments here…

May you all be blessed with dazzling views by taking the right path! 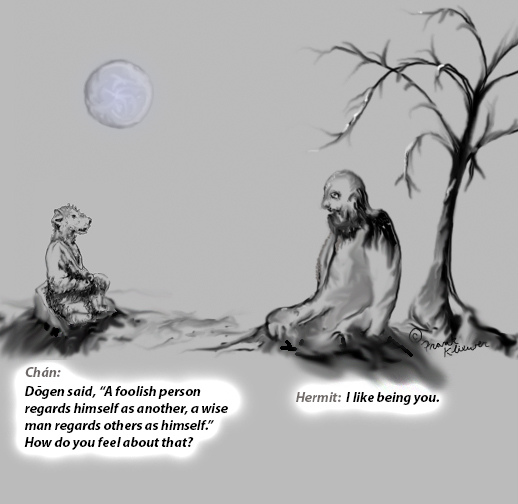 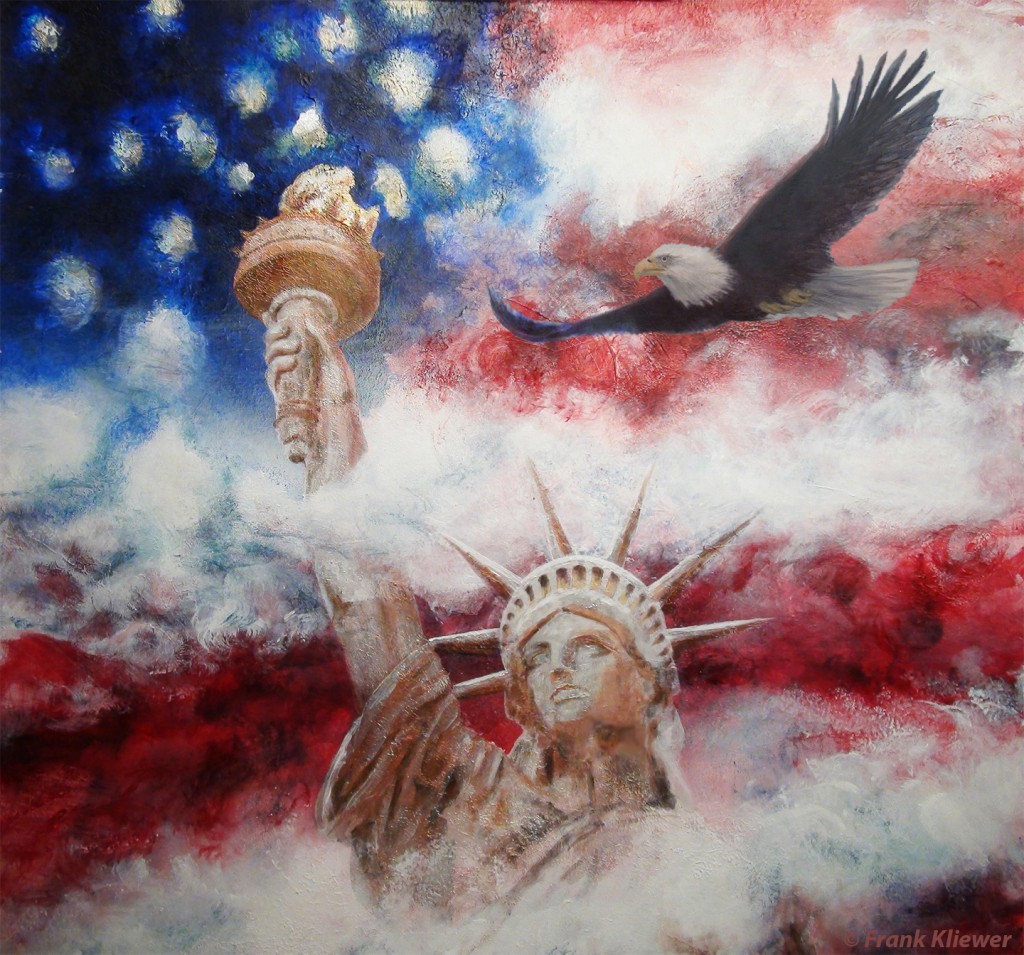 …finding peace and liberty through courage and compassion.

To turn one’s back on delusion is to attain to the ultimate;