If the temperature outside is freezing the liquid inside your hummingbird feeder, please buy a second feeder. Have it inside ready to change out with the frozen one in the morning.

Our space technology and Alexander Gerst delivers amazing views of our planet.

Thank you Alexander for your artistry in creating this incredible experience through your wonderful composition of 12,500 images.

Do not fear mistakes. There are none.

Live HD Feed from the International Space Station. It may take two clicks to get it going. The feed is from alternating views of 4 different cameras (if screen is black, then the Station is on the dark side of the Earth). If you mouse over “Live” in the right bottom corner of the screen you will see a full screen toggle option.

What makes this so much more compelling to watch than an ordinary satellite feed is that you know there are humans up there with these cameras. The International Space Station travels in orbit around Earth at a speed of roughly 17,150 miles per hour (that’s about 5 miles per second!). This means that the Space Station orbits Earth (and sees a sunrise) once every 92 minutes!

For more information on where exactly the ISS is at this moment, go here: http://eol.jsc.nasa.gov/HDEV/ 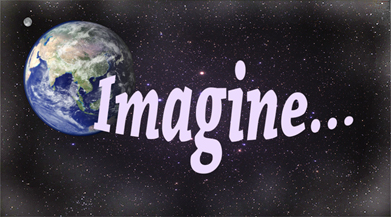 Thinking by metaphor is a useful exercise. Here is one that reaches us on a level we know well, the movie genre:

What’s in your movie?

The Evening  Grosbeaks returned earlier this year than last, which was in March. It is great to see the gregarious flock come flying in. They are usually in a group of 6 or 8, playing with and feeding each other. During this visit they descended onto the maple trees to enjoy the whirligig seeds.