As subscribers and daily readers of the Wall Street Journal (print and online) we found the following article extremely telling in light of our past success and current work focus: 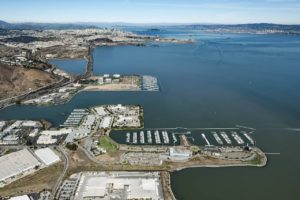 For eight years, a pair of local developers gradually readied a 42-acre strip of waterfront land 10 miles south of downtown San Francisco for a major project, steering it through local land-use approvals.

Now, a group of major Chinese developers is poised to do the heavy lifting. The venture of Greenland Holding Group, Ping An Trust and other investors paid $171 million last month for the site that juts into San Francisco Bay.

The new owners are planning a more than $1 billion development aimed at biotechnology companies, an industry flourishing in the area. “We are pretty confident about the local market and particularly about the research-and-development market,” said Taotao Song, chief executive of the venture.

Over the past three years, Chinese investors have plowed money into some of the highest-profile developments in the U.S. Other cities with projects underway or in the pipeline include New York, Boston, Chicago, Los Angeles and Miami. 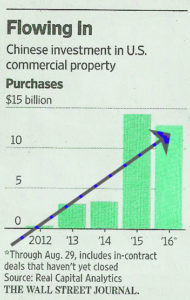 The flow of cash from China into U.S. commercial property is continuing unabated as companies seek to diversify outside of China at a time when confidence is fading in their local real-estate markets, real-estate executives say.

President Xi Jinping’s anti-corruption campaign has also compelled Chinese investors to seek projects abroad as a way to hedge against a possible crackdown to their business at home. Officials have blocked property sales and detained companies’ executives during investigations.

In the first half of 2016, completed U.S. commercial property purchases by China-based investors were up 19% over a year earlier to $5 billion, according to data tracker Real Capital Analytics Inc. Including deals under contract that haven’t been finished, Chinese investors have committed $12.9 billion this year, nearly matching the $14 billion in all of 2015. The rate of increase does appear to be slower this year, given that in 2014 there was just $3.4 billion in sales to Chinese investors, according to Real Capital.

Still, there are some headwinds back home for Chinese investors as officials seek ways to stanch the flow of money out of China. For those real-estate investors that do get money out, developing new buildings is a main focus, given that it offers far higher returns but also more risk than buying existing buildings.

“The vast majority are looking for development opportunities,” said Stephen Collins, who oversees a global capital markets group at real-estate investment-services company JLL. The Chinese companies have experience with development at home, and believe they “can make more money buying the land, building it and selling it,” than just buying an existing tower, he said.

Projects controlled or partly owned by Chinese companies include a development to create Chicago’s third-tallest tower; a planned tower that would be San Francisco’s second-tallest building; a cluster of giant mixed-use projects in downtown Los Angeles; and a planned skyscraper in downtown Boston by Chinese developer  Gemdale Corp. 600383 3.62 %

Earlier this month, in one of the flashiest investments yet, China’s Shanghai Municipal Investment said it was joining with New York-based Extell Development Co. to build the $3 billion Central Park Tower. The condo skyscraper is set to rise 300 feet taller than the Empire State Building to become the tallest apartment tower in the U.S. 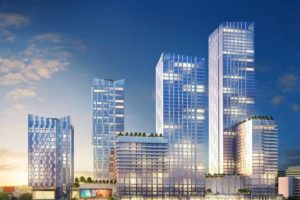 For all of these projects, a big risk is timing. The U.S. is seven years into an economic growth cycle, making many wonder how much longer the good times can last. Much of this concern is focused on Manhattan’s luxury-condo market, where Chinese companies have funded a large crop of towers that are just being built, despite a slowdown in sales and widespread concerns about a condo glut.

The largest Chinese developer in the U.S. is Greenland Group, which has a $1 billion cluster of towers named Metropolis being built in Los Angeles. The company also owns 70% of a $6 billion apartment development in the New York borough of Brooklyn, where three towers have sprouted since it first invested in 2014. More are on the way.

Greenland executives predicted in mid-2014 that they would double their pipeline within a year and have considered numerous sites throughout the country. But the company ended up being less active than expected: its first U.S. deal since mid-2014 was the San Francisco Bay site it purchased for the biotech center.

The seller of that site was a venture of Shorenstein Properties and SKS Partners, which bought it in July 2008 for $85 million and won city approval for a 2.3 million-square-foot development.

Greenland and its partners plan to start moving ahead on a 500,000-square-foot first phase as soon as infrastructure work being done by the city of South San Francisco is completed in mid-2018. Greenland said the venture would begin construction whether or not any of the space is leased beforehand.

—Esther Fung contributed to this article.