It is clear we have a long way to go in the development and use of social networks. Our sense is that our desire to be happy will lead to new social networking venues, more personalized to our individual needs.  As Douglas Adams put it in Hitchhiker’s Guide to the Galaxy, “…And so the problem remained; lots of the people were mean, and most of them were miserable, even the ones with digital watches.”

A study of 50,000 people in Italy concludes that online social networks have a significant negative impact on individual welfare. 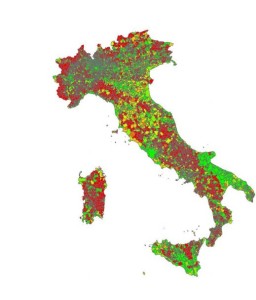 Online social networks have permeated our lives with far-reaching consequences. Many people have used them to connect with friends and family in distant parts of the world, to make connections that have advanced their careers in leaps and bounds and to explore and visualize not only their own network of friends but the networks of their friends, family, and colleagues.

But there is growing evidence that the impact of online social networks is not all good or even benign. A number of studies have begun to find evidence that online networks can have significant detrimental effects. This question is hotly debated, often with conflicting results and usually using limited varieties of subjects, such as undergraduate students.

Today, Fabio Sabatini at Sapienza University of Rome in Italy and Francesco Sarracino at STATEC in Luxembourg attempt to tease apart the factors involved in this thorny issue by number crunching the data from a survey of around 50,000 people in Italy gathered during 2010 and 2011. The survey specifically measures subjective well-being and also gathers detailed information about the way each person uses the Internet.

The question Sabatini and Sarracino set out to answer is whether the use of online networks reduces subjective well-being and if so, how.

Sabatini and Sarracino’s database is called the “Multipurpose Survey on Households,” a survey of around 24,000 Italian households corresponding to 50,000 individuals carried out by the Italian National Institute of Statistics every year. These guys use the data drawn from 2010 and 2011. What’s important about the survey as that it is large and nationally representative (as opposed to a self-selecting group of undergraduates).

The survey specifically asks the question “How satisfied are you with your life as a whole nowadays?” requiring an answer from extremely dissatisfied (0) to extremely satisfied (10). This provides a well-established measure of subjective well-being.

The survey also asks other detailed questions such as how often people meet friends and whether they think people can be trusted. It also asked about people’s use of online social networks such as Facebook and Twitter.

This allowed Sabatini and Sarracino to study the correlation between subjective well-being and other factors in their life, particularly their use of social networks. As statisticians they were particularly careful to rule out spurious correlations that can be explained by factors such as endogeneity bias where a seemingly independent parameter is actually correlated with an unobserved factor relegated to the error.

But of course interactions on online social networks are not face-to-face and this may impact the trust you have in people online. It is this loss of trust that can then affect subjective well-being rather than the online interaction itself.

Sabatini and Sarracino tease this apart statistically. “We find that online networking plays a positive role in subjective well-being through its impact on physical interactions, whereas [the use of] social network sites is associated with lower social trust,” they say. “The overall effect of networking on individual welfare is significantly negative,” they conclude.

That’s an important result because it is the first time that the role of online networks has been addressed in such a large and nationally representative sample.

Sabatini and Sarracino particularly highlight the role of discrimination and hate speech on social media which they say play a significant role in trust and well-being. Better moderation could significantly improve the well-being of the people who use social networks, they conclude.